I have always thought I would never do a “best” post. Until now. At the last restaurant I worked, this was one of the few dishes I didn’t dare to take off the menu…ever. It was a guest and staff favorite. It has been six years since then and this year I received multiple emails asking for the recipe. This recipe for the best brussel sprouts & cauliflower bowl is a keeper. It’s awesome as a side but perfectly amazing on it’s own as an entire meal.

The key to the absolute best flavor? Don’t fear the caramelization. Let the brussel sprout leaves fall off as you cut them and don’t throw them away. They are going to turn into crispy leaves with just a little bit of char. This is the gold!

Method
1. Preheat oven to 400 f.
2. Line two sheet pans with parchment paper. Put brussels on one and cauliflower on the other. Drizzle both with olive oil and gently toss with your hands. season both with salt and pepper. Roast until they caramelize and are tender when pierced with a knife, about 30-45 minutes.
3. While the veggies are roasting make the vinaigrette. Put the bacon in a saucepan over medium-low heat and cook until crispy.
4. Take the pan off the heat. In a large bowl transfer the bacon and about 2 T. of bacon fat. (you can freeze the rest for use later). Whisk in olive oil, dijon, lemon juice, honey, golden raisins, almonds and fresh herbs.
5. When the veggies are done cooking add them to the bowl. Give them a good stir and check seasoning adjusting as needed.
6. Serve immediately.

Component in Action
-use as a filling for tacos.
-serve as a side for a big dinner like Thanksgiving or alongside a roasted chicken.
-top over a cooked grain like rice or quinoa 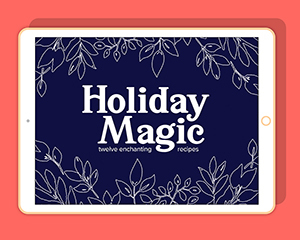 Our FREE eBook has 12 enchanting recipes to help make your holiday season magical.

Success! Now check your email to confirm your subscription and grab your eBook.

No images found!
Try some other hashtag or username